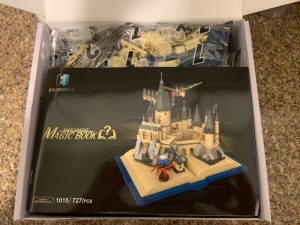 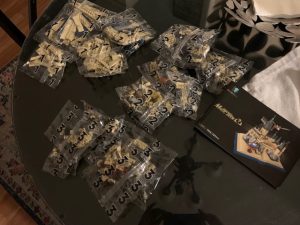 The three groupings of bags in the Harry Potter Set

I found building this Amazon set to be fairly easy.  This set would be suitable for children as it only contains 727 bricks and the instructions were simple to follow. Additionally, I found the quality of the bricks in this building block set to be better than the bricks in the DHGate Grand Emporium-style set.  However, that might be due to the fact that the DHGate set was much more complicated and contained a huge number of bricks.

The Harry Potter set contained some very cute elements, but some of the elements were subpar.  For example, the Whomping Willow (with Mr. Weasley’s car) was laughable. However, with only 727 total building blocks, a quality tree was probably not in the cards. 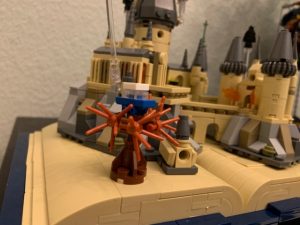 The Harry Potter set’s version of the Whomping Willow with Mr. Weasley’s car

Similarly, I  do recognize how difficult it is to build a dragon out of building blocks.  This set’s version of a dragon is passable because you could tell the completed piece was a dragon and not a large bird.

Additionally, the set contains three dementors.  The dementors look cute and they can be positioned in various directions because they are attached to clear rods. 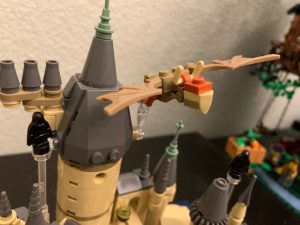 The dragon and two dementors. 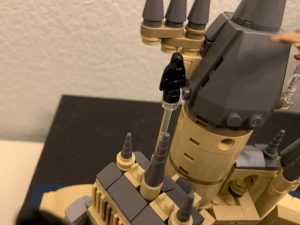 One of the dementors

As I said, this was an easy build and I really like the end product. It is small – about 8″ x 6″-  and inexpensive.  I got it on sale during Black Friday for around $27.  I believe there was a 5% off coupon as well. A quick check of Amazon shows that it is now selling for around $40, but there is a 5% off coupon.

I liked this Harry Potter set and I would certainly consider buying similar sets from Amazon.  In addition to this set, ENJBRICK  sells a “UP” set (a house that is being lifted up by balloons, as was the case in the movie “UP”);  a bookshop; a hotel; a Harry Potter Diagon alley-type set; and many other sets.   So, if Lego building sets are too expensive, these knockoff sets from Amazon may be a viable option.

My passion is small-scale stuff, from Legos to small toys to miniatures to small home decor items. If you enjoy collecting and viewing miniatures and other little things, I hope this website will provide you with helpful information and useful links.

We use cookies on our website to give you the most relevant experience by remembering your preferences and repeat visits. Read More By clicking “Accept All”, you consent to the use of ALL the cookies. However, you may visit "Cookie Settings" to provide a controlled consent.
Cookie SettingsAccept All
Manage consent

This website uses cookies to improve your experience while you navigate through the website. Out of these, the cookies that are categorized as necessary are stored on your browser as they are essential for the working of basic functionalities of the website. We also use third-party cookies that help us analyze and understand how you use this website. These cookies will be stored in your browser only with your consent. You also have the option to opt-out of these cookies. But opting out of some of these cookies may affect your browsing experience.
Necessary Always Enabled
Necessary cookies are absolutely essential for the website to function properly. These cookies ensure basic functionalities and security features of the website, anonymously.
Functional
Functional cookies help to perform certain functionalities like sharing the content of the website on social media platforms, collect feedbacks, and other third-party features.
Performance
Performance cookies are used to understand and analyze the key performance indexes of the website which helps in delivering a better user experience for the visitors.
Analytics
Analytical cookies are used to understand how visitors interact with the website. These cookies help provide information on metrics the number of visitors, bounce rate, traffic source, etc.
Advertisement
Advertisement cookies are used to provide visitors with relevant ads and marketing campaigns. These cookies track visitors across websites and collect information to provide customized ads.
Others
Other uncategorized cookies are those that are being analyzed and have not been classified into a category as yet.
SAVE & ACCEPT