This post discusses my experience ordering and building a DH Gate knockoff of the Lego Grand Emporium set. I note that I wanted to complete my modular display with the Grand Emporium building, but the price of this retired Lego set was so outrageous (over $400), that I ended up buying a DH Gate knockoff version. The set cost me around $80.  Ordering from the DH Gate website was easy, though all the various offers and coupons were a bit confusing.  Nonetheless, delivery was incredibly swift (less than 5 days).  In the rest of this post, I will describe my building experience.

Here is what arrived, a kind of beaten-up mailer:

When I tore open the mailer, this was what was inside. Needless to say, the jumble of bags looked daunting.

I soon figured out that this DH Gate Grand Emporium knockoff set consisted of three groupings of bags, labeled 1, 2, or 3. Unlike most Lego sets, the knockoff version contained numerous bags per set (Lego usually limits its groupings to 1-3 bags/set).

First, I organized the bags by groupings and put all the #1 bags on my table.  Then, I pulled out the DH Gate instruction book and began building the first level.  I learned that each grouping of bags corresponded to one level of the three levels knockoff Grand Emporium.

The first level was a clothing store with a cash register.  The offering of clothing was sparse, so I modified the floor to add more pants, a stand with scarves and a hat, and an additional mannequin. 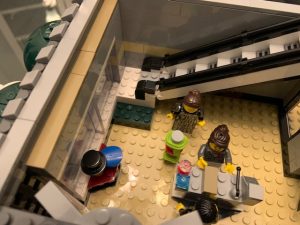 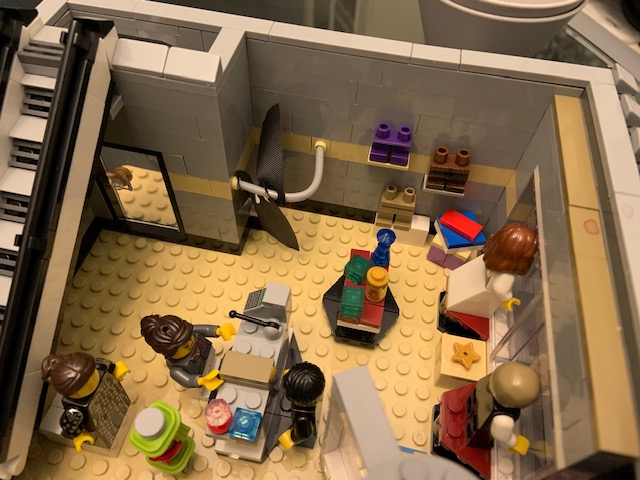 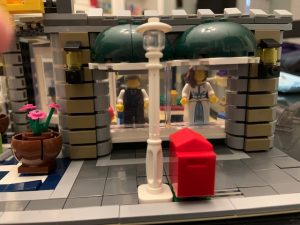 Outside view of the store display window 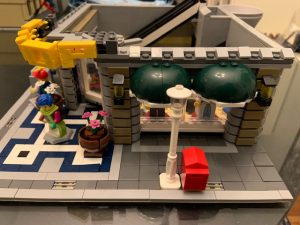 Level two of the DH Gate version of Grand Emporium was a wine and food bar of sorts.  Again, it was so sparse that I modified it with extra food, some minifigures, a food display stand on the left (in addition to the table), and a leftover “piano” (on the right) from another set. 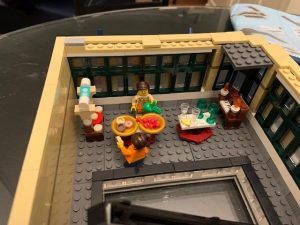 Here’s a view of the exterior of Level Two. 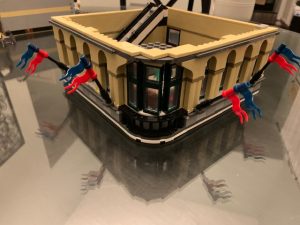 If the other two levels were sparse, Level 3 was REALLY sparse.  I am sure the knockoff version by DH Gate is an accurate representation of the inside of the original Lego set.  I did not modify Level 3 as much, except to later add a workout mat (not pictured). 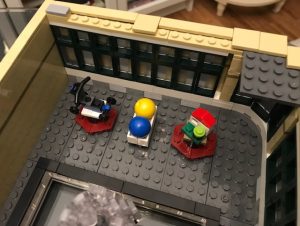 The real eye-catching piece of Level 3 was the chandelier. 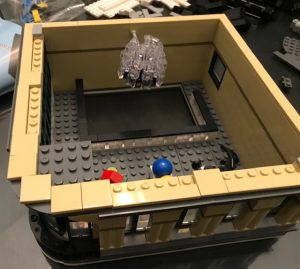 The Roof element was fun to build. There is a large sign on top of the roof and a window washer that suspends from the roof over a Level 3 window. 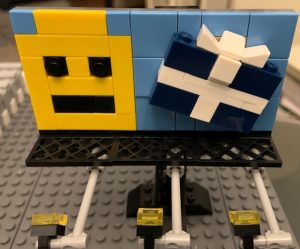 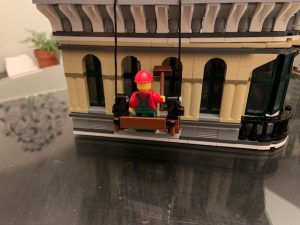 The completed building looks really good and it’s hard to tell if it is a knockoff versus a real Lego modular set. 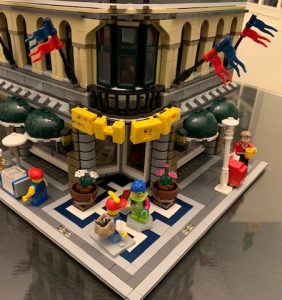 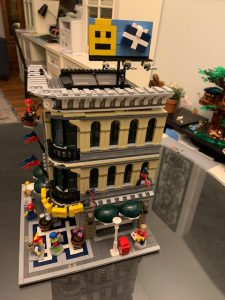 Overall, I am impressed with the DH Gate version of the Lego set.  I did not really rush building this set.  I do acknowledge that the knockoff version had its frustrations, from the large amount of bags per grouping to the obvious difference in quality between the DH Gate bricks and Lego bricks. The bricks in the knockoff set did not fit as easily as actual Lego bricks. However, all the bricks needed to build the modular were included in the bags.

So, despite a few frustrations, if you are looking for retired modular sets and do not have the cash to pay for the original Lego offering, there are some cheaper options out there.  Obviously, there is next to no resale value when buying a knockoff.   The point of getting fake Legos is to build, not to hold the sets as investments.

My passion is small-scale stuff, from Legos to small toys to miniatures to small home decor items. If you enjoy collecting and viewing miniatures and other little things, I hope this website will provide you with helpful information and useful links.

We use cookies on our website to give you the most relevant experience by remembering your preferences and repeat visits. Read More By clicking “Accept All”, you consent to the use of ALL the cookies. However, you may visit "Cookie Settings" to provide a controlled consent.
Cookie SettingsAccept All
Manage consent

This website uses cookies to improve your experience while you navigate through the website. Out of these, the cookies that are categorized as necessary are stored on your browser as they are essential for the working of basic functionalities of the website. We also use third-party cookies that help us analyze and understand how you use this website. These cookies will be stored in your browser only with your consent. You also have the option to opt-out of these cookies. But opting out of some of these cookies may affect your browsing experience.
Necessary Always Enabled
Necessary cookies are absolutely essential for the website to function properly. These cookies ensure basic functionalities and security features of the website, anonymously.
Functional
Functional cookies help to perform certain functionalities like sharing the content of the website on social media platforms, collect feedbacks, and other third-party features.
Performance
Performance cookies are used to understand and analyze the key performance indexes of the website which helps in delivering a better user experience for the visitors.
Analytics
Analytical cookies are used to understand how visitors interact with the website. These cookies help provide information on metrics the number of visitors, bounce rate, traffic source, etc.
Advertisement
Advertisement cookies are used to provide visitors with relevant ads and marketing campaigns. These cookies track visitors across websites and collect information to provide customized ads.
Others
Other uncategorized cookies are those that are being analyzed and have not been classified into a category as yet.
SAVE & ACCEPT